is a real game developer!

How putting cats in space helped me to believe in myself: A Postmortem of Cosmic Kitty Pop

TL;DR: I escaped the chains of “impostor syndrome” by making a silly little game about cats… in space.

I started my relationship with game development as an outsider. In 2007, my friends and I managed to convince the tech startup we worked for to send us to the annual Game Developer’s Conference in San Francisco, even though our web-centric jobs didn’t really have anything to do with making games. I can’t remember the exact rationale for how we pulled that off, but I’m sure it was perfectly convincing at the time. It’s a bizarre feeling to be at the world’s largest game dev conference without having a clue about how to make games, but we managed to do it—two years in a row. 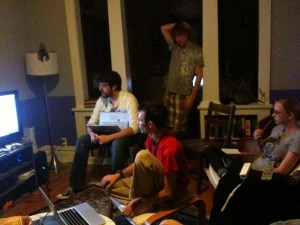 I started actually making games in 2010 when Happy Badger Studio first formed as a part-time endeavor. Our first game together, Stodgy Gents, had a relatively large team, so my primary responsibilities were project management, some user interface work, and other small roles as they were needed. It was invigorating for all of us to publish our first game, but having felt like my roles were largely nonessential, I definitely didn’t feel like I had a handle on what I was doing.

By mid-2013, we had published several games and started work on countless others, allowing us to hone our skills and improve our workflow. At this point, the team had greatly decreased in size, and I’d taken on the role of character designer and animator. In spite of having a handful of games under my belt, however, I was the only remaining partner who hadn’t led design on a project. Of course, I understand that not everyone in the industry can be a game designer, but being a part of a small indie studio, I wanted to feel competent in as many disciplines as possible. In May 2013, I decided that my new personal goal was to design a simple game that I could personally develop using a visual design engine. 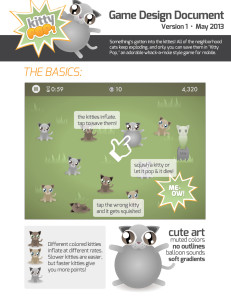 The evening I tasked myself with this game design challenge, I came up with the concept of “Kitty Pop,” best described as whack-a-mole with exploding cats. Nothing too special, but I figured that the mechanic was tried-and-true, and it would be straightforward to develop. Being most capable with art and UI design, I created a visual game design document, pitched the idea to my studio-mates, and was met with great encouragement.

I immediately started development using the “Stencyl” engine, and with a little help, I created a very rudimentary proof-of-concept pretty quickly. Then I got stuck. The game wasn’t fun. I couldn’t get the engine to do what I wanted to do; simple functionality suddenly felt complicated. I had a hard time making sense of the advice I was getting from my teammates. It felt like the game was falling apart.

Kitty Pop wound up on the back burner as I slowly poked around in the development project over the next couple of months, never progressing much beyond the initial proof of concept, feeling haunted by what was shaping up to be a failed attempt at leading a project. The longer I spent away from Kitty Pop, the more guilty I made myself feel for abandoning it. Once in a while, I’d open up the development project, stare at the code, feel useless, and close it again. This happened for about a year.

On the evening of April 15, 2014, we were contacted by the Saint Louis Science Center to demo a game at their “Star Wars” themed First Fridays event, happening on May 2. I had a moment of inspirational resurgence and decided right then that if we were going to make a new game ready to demo in two weeks, I wanted it to be Kitty Pop… IN SPACE. (You know, to fit into the “Star Wars” theme.) 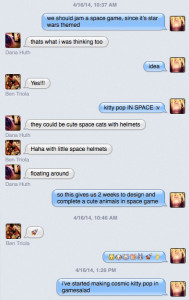 No joke, this is how it happened. Emoji and all.

I bounced the new “…in space” idea off of my teammates, at which point we all got very excited and they had the brilliant idea to give the cats space helmets. We were sold. As I began re-imagining the game around the theme, I realized that having the cats float in space actually solved a lot of the design problems that I had with the original concept; the cats could be procedurally generated from off-screen, the difficulty could easily ramp up with the number of cats on-screen, and they could move randomly, all creating more of a challenge for the player. Feeling confident in the new concept, I scrapped the old project and restarted development in GameSalad, a very simple game design engine that my teammates had all used successfully. Upon acquainting myself with the engine via tutorials, GameSalad came much easier to me than Stencyl had, and in just a week of development, I completed the bulk of the functionality. Over the next week, I polished the gameplay and interface with some help from my teammates, and was able to take a very solid demo to its first public round of playtesting at the Science Center on May 2.

Visually, the game hasn’t changed much since that initial demo, but playtesting has ultimately proven invaluable to the experience of the game. Thanks to feedback from a number of great people, I added collisions, tweaked UI, modified scoring, added more SFX, and created both leaderboards and achievements. I am so proud of what a fun and polished game it has become. 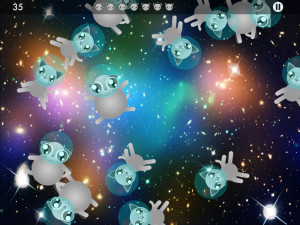 We were able to submit Cosmic Kitty Pop to the Apple, Google, and Amazon app stores on May 20, in hopes to publish in early June. Unfortunately, unforeseen issues relating to GameSalad bugs and in-app purchases saw it rejected from the iOS App Store five times before it was finally accepted in mid-July. We set a release date for July 31, the day before my birthday. It was official—my game was done.

Thanks to science and space helmets, I finally feel like a capable game developer. On August 1 (yes, that’s my birthday), we will bring Cosmic Kitty Pop to the August First Friday’s event at the Science Center to celebrate its release. I can’t wait to celebrate at the very place that acted as the catalyst behind the reinvention of Cosmic Kitty Pop and, ultimately, my own path to self-discovery as a game developer.